Fight the Sleep Monster with Foosh

What’s a Sleep Monster?  When doing an adventure race longer than 18 hours, sleep deprivation can come into play.  At some point during a long race, when you’ve pushing yourself physically and mentally for anywhere from 20 – 30+ hours with no sleep, you’re going to want to fall asleep.  Well, let me rephrase that.  You may not want to sleep, but your body and mind will begin to shut down.

The Sleep Monster will basically force you to fall asleep.  It will jump on your back, and no matter what you do to try to avoid it, you will start dozing.  It doesn’t matter if you’re hiking, paddling, or biking.  I even nodded-off for a split-second biking down a hill at 30 mph.  Fortunately my brother and teammate yelled at me to wake me up before crashing. 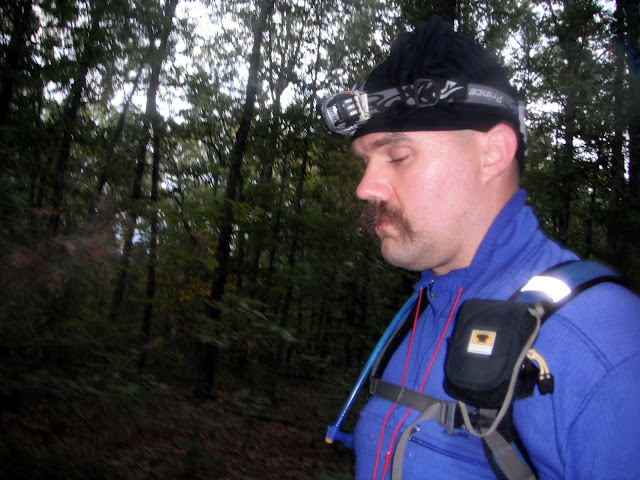 A shot of me losing my battle to the Sleep Monster as I'm hiking.

The Sleep Monster may also play tricks on you.  You may begin to hallucinate.  The first time it happened to me, I swore I was hiking with a prickle of porcupine.  I’ve “seen” log cabins, giant snakes, floating samurai heads, and even Chewbacca from “Star Wars.”  It’s basically like what I imagine being on drugs might be like, only you don’t have to actually break the law.

The “Sleep Monster” can also ruin your race.  Adventure racing navigation can be very difficult.  It’s even harder at night… And in the rain.  But throw the Sleep Monster into the mix, and you can get really lost.  And I mean you can find yourself completely off the map with no idea how you got there.

When things get really bad, the best idea is to take a short 20 – 60 minute nap.  But before it gets to that point, I recommend Foosh caffeinated mints.  Actually, I think they should be called Life Savers since they’ve saved me and my teammates on more than one occasion, but I guess that name is probably trademarked.  When I ran out of them at the Berryman 36-Hour AR, the Sleep Monster nearly destroyed me, and it got ugly in a hurry

So let me enlighten you to the ways of Foosh.  These little mints are basically Altoids on Steroids.  Maybe they should be called SterAltoids, but I understand the “Foosh” name, too.  Each caffeinated mint is the caffeine-equivalent of one cup of coffee, and you can feel the energy boost hit you in a hurry – FOOOOOOOSH!  Not only does the caffeine kick in quickly, but the taste and the icy-hot burn in your mouth really perk you up as well.  Delicous!  And an added benefit of the peppermint in the mints is it can really soothe your stomach (which can also be a big problem for longer adventure races – but I’ll save that for another post).

Foosh mints come in handy little “blister packs” holding 6 mints in each sleeve, and they’re the perfect size for tucking into a pocket of your pack or jacket.  These things are mandatory gear for our team, especially on longer adventure races.  I love these things so much that I keep several packs in my drawer at work and in each mini-van (yes, I own two mini-vans… With four kids it was either that or a short-bus).  If I need a little pick me up at work or on a long drive, I just pop a mint, and I’m good to go (with minty-fresh breath, I might add).  And during an adventure race, I might pop two mints, slam some water, and eat something.  This usually keeps the Sleep Monster at bay.

You should definitely arm yourself with good sleep strategies before any long race.  As part of a strategy to avoid the Sleep Monster, Foosh Mints couldn’t get a higher recommendation from me.  And even if you’re doing a “shorter” race of 8 – 12 hours, you may not always get enough sleep.  Foosh can help there as well.