If you’ve read much about adventure racing, you know that races typically include a variety of disciplines such as orienteering, trekking, mountain biking, and paddling. A successful adventure racer will be proficient in these areas, but there are some other less obvious skills that can make or break a race.

Eating: You would think that the last thing you’d forget during a long race is food, but eating can be difficult to remember and harder to do, especially late in a race. It’s important to keep on top of fueling as well as to know what kind of foods you can tolerate at different points in a race. In his last post, Luke discussed eating during an adventure race. If you haven’t read it yet, definitely check that out because it’s full of great information.

Traveling with weight: If you followed my advice from last week, you got a bargain on a good pack. Make sure to get some practice biking and hiking/running with it. I barely notice mine when I’m trekking or biking, but the added weight changes my stride when I’m running downhill. Experience with a loaded pack will also help you figure out the best places to store gear and food. 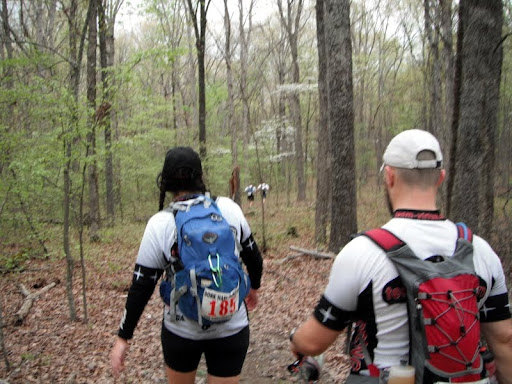 Trekking with full packs at the LBL Challenge

Rolling with the punches: Unexpected things will happen. Your ability to adjust and move on will dictate how your race goes. Don’t get so caught up in your idea of how the race will go that you can’t deal with the hiccups that are a natural part of any long race. In my first long race, one of my teammates was struck by debilitating cramps less than 10 minutes into our first trek, slowing our pace to a stroll. That wasn’t the plan, but it was our reality. Rather than get upset about it, the rest of us did our best to assist, support, and distract him until he was feeling better. In a long race, bumps such as minor injuries and mechanicals are the norm, not an exception. 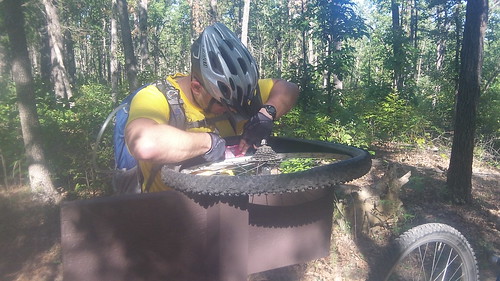 Enduring: Just because adventure racing is awesome doesn’t mean it isn’t terrible at times. Go into your race with the mindset that you’re in for the duration. One of my mental touchstones is my friend Bob’s reminder: “Just think how great the story wouldn’t be if it ended, ‘It got hard and then we quit.'” As a team, we rarely tell stories about the easy parts of our races, but we do reminisce about death marches, tipped canoes, and yellow jacket attacks. 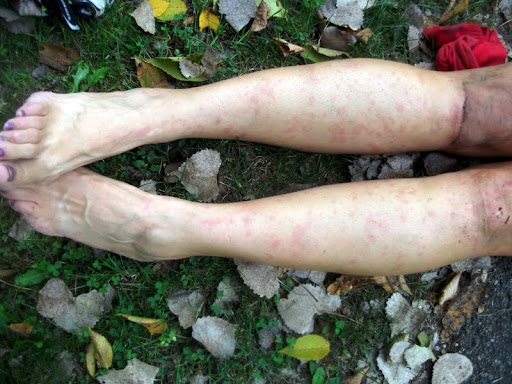 Aftermath of a close encounter with a yellow jacket nest.

Getting along: Adventure racing can be a high pressure situation. You might be lost, sore, and/or tired. You might strongly disagree with your teammates about the next move or have heard one too many cracks about being old. As I wear down, the first thing to go is my sense of humor, and it takes me a lot longer to process a joke; my brother, on the other hand, loses his ear for sarcasm and starts getting irritable. It’s important to give your teammates the benefit of the doubt and to watch your own words. Mom had it right: “If you don’t have something nice to say, don’t say anything at all.”

Checking your ego: No one wants to be thought of as weak, but the cool thing about an adventure race is that everyone will face low points. It’s not tough to refuse help and soldier on; it’s silly. More than that, it’s selfish. If I turn down a teammate’s offer to carry my pack or to tow me up a hill when I’m struggling on the bike, I’m not being independent; I’m slowing down my team. Adventure racing isn’t about what YOU can do, it’s what your team can accomplish together. 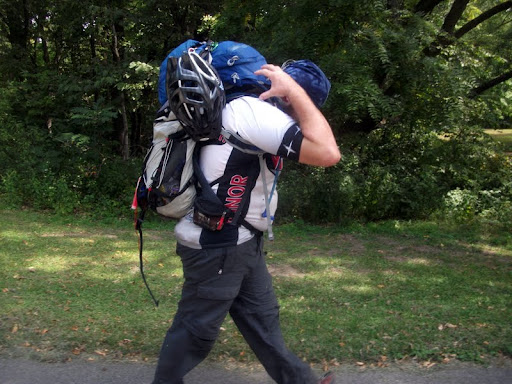 Bob shoulders his pack AND mine at Thunder Rolls

Clearly adventure racing requires a lot more than simple physical ability, and forming a team is more complicated than finding other people to sign up to race.  My list is a start…what are some other important skills for AR success?