Get Buff for Adventure Racing!

There is one item not on the mandatory gear list that I carry during every adventure race regardless of the season, forecast, terrain, or any other variable.  A satellite phone?  Nope.  A personal location beacon?  Uh-uh.  It’s not what you might think.  It’s a garment actually – headwear to be exact – and it’s the most versatile piece of clothing I own.  I wouldn’t even think of racing without it.  It’s The Buff. 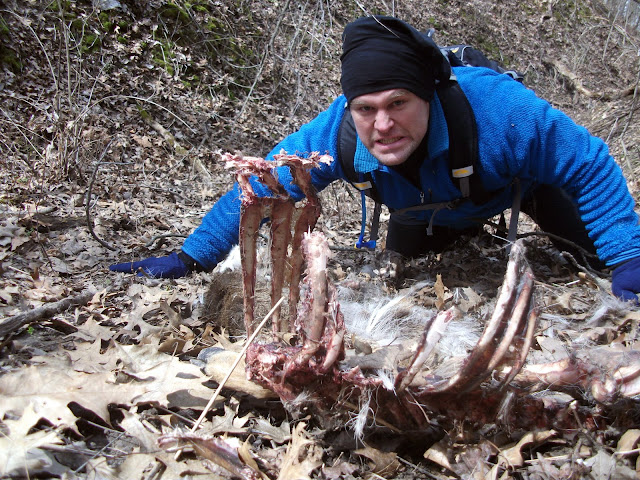 One of the many ways to wear a Buff. (Eating a deer carcass is optional)

The Buff is just a tube of non-cotton fabric with no seams.  That’s it.  Seriously, that’s all it is.  Sounds pretty basic, doesn’t it?  Well, it is basic.  The simplicity of the Buff makes it that much more amazing, and it’s absolutely worth picking one up for 20 to 30 bucks.  I doubt you’ll find a piece of clothing with more uses anywhere.  It can be worn several ways:

I usually wear mine as a cap or as a headband (to keep my ears warm while not overheating).  I’ve also worn it as a wristband, do-rag, hat/helmet-liner, balaclava, and even as an eye-mask to block the sun when trying to sleep.

A Buff can also be used as an impromptu bandage, sling, eye-patch, glasses-wipe, a strap to tie your bike to your canoe, or whatever else you might need during an adventure race.  It really is an incredible little garment.

On top of having so many uses, the Buff weighs next to nothing, it fits under a helmet nicely and perfectly over a ball cap, it wicks like a champ, it breaths well, and with tons of patterns, designs, and colors, it just looks cool.  A Buff can even keep you warm when it’s cold and cool when it’s hot.  And now there is a Buff to specifically suit your needs with many new models including a model for kids, for fisherman and hunters, UV protection, and there’s even a model with reflectivity for safety on the roads.

So here’s the quick breakdown:

I can’t recommend the Buff highly enough.  I own two Original Buffs for summer and the shoulder seasons and one Merino Wool Buff for colder races.  I’ve taken a Buff with me on every adventure race since I’ve owned one, and I don’t ever want to race without it.  Go get one now, and thank me later.  And with Christmas just around the corner, you’d make the adventure racer in your family really happy if they find a Buff under the tree.